Located in the west bank of Xiangjiang River, rested under the foot of Yuelu Mountain, the Hunan Art Museum project was approved in 2012. 7 years later, it was officially opened to the public at the end of September, 2019. Currently, it is the largest professional public art museum with the most comprehensive functions in Hunan Province. The museum is built by Shanghai Institute of Design, Huajian Group. Upon its debut, this building became a new, high-profile landmark in the local area, and its glazed terracotta facade design is one of its highlights. 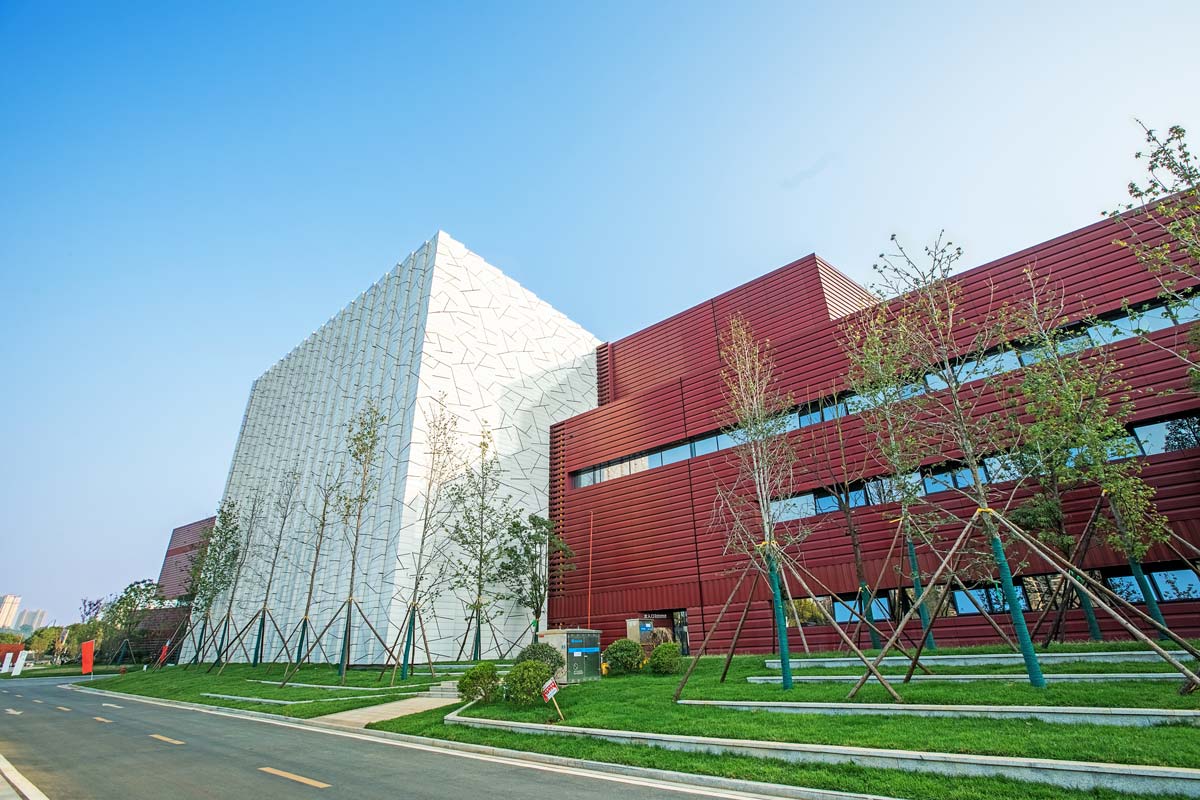 Design of terracotta wall cladding with white block at the top

The expected visual effect that the architects hope to achieve for the white block part of the facade goes as follows: seeing from a distance, it looks like vertically folded, traditional Chinese calligraphy paper, and upon a closer look, the architectural texture of cracked Chinese glazed ceramics is accomplished. These two designs boast distinct features from the traditional Chinese culture. When the lights are on at night, the light shines through the gaps in the building facade, delivering supreme beauty. 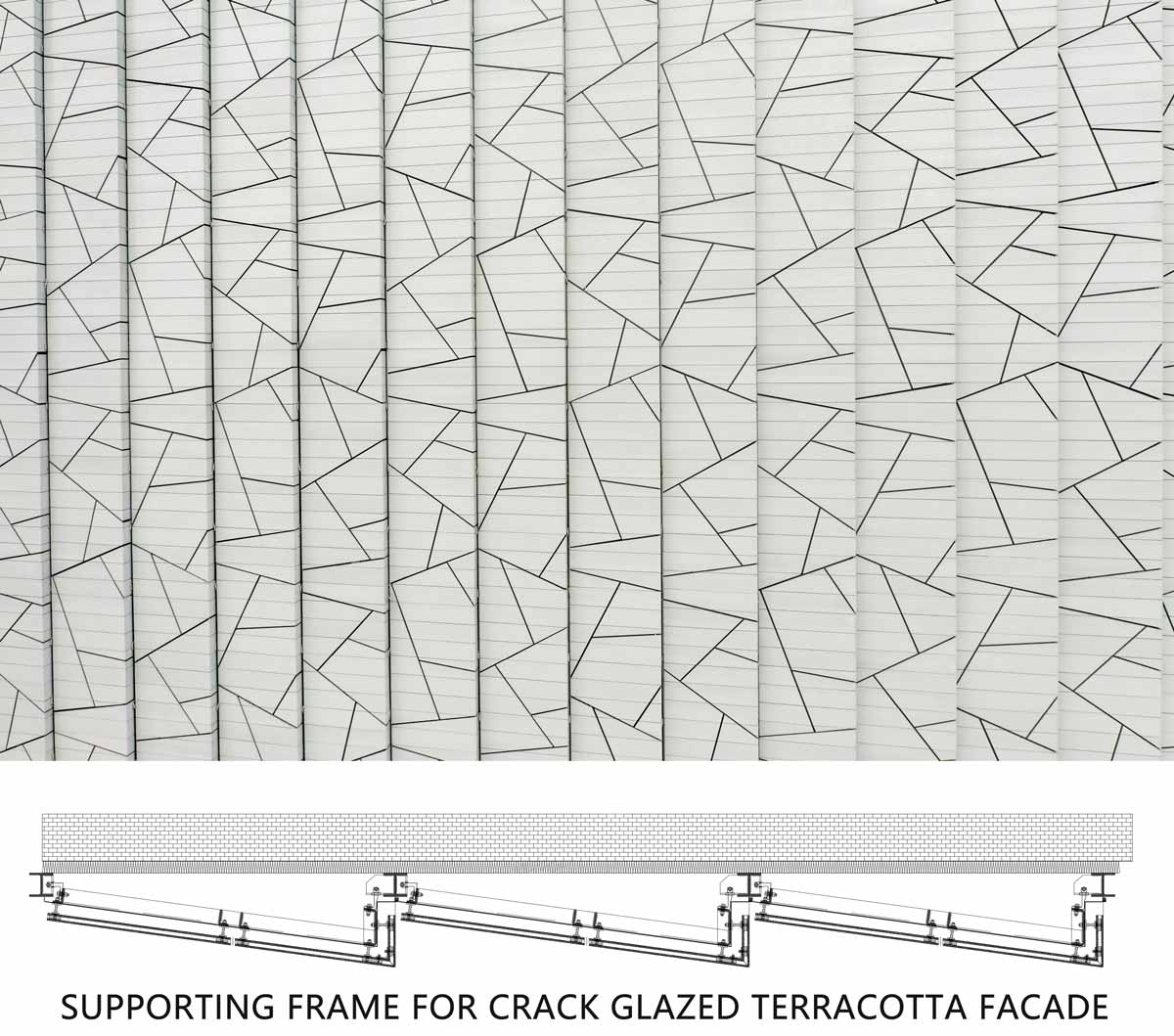 The architects finally adopted LOPO's 30mm white Terracotta Panels with a face width of 300mm. To achieve the above mentioned design effects, the architects first calculated and made an overall arrangement of the entire terracotta facade by dividing various irregular polygons. The installation company accurately cut and arranged each terracotta wall tile according to the drawings at the construction site. Since each terracotta wall tile varied in shapes after cutting, when it comes to the installation system, the method of directly drilling and fixing at the back of the Terracotta Panels is adopted, so as to render the irregular pattern on the white terracotta façade in a skillful manner. 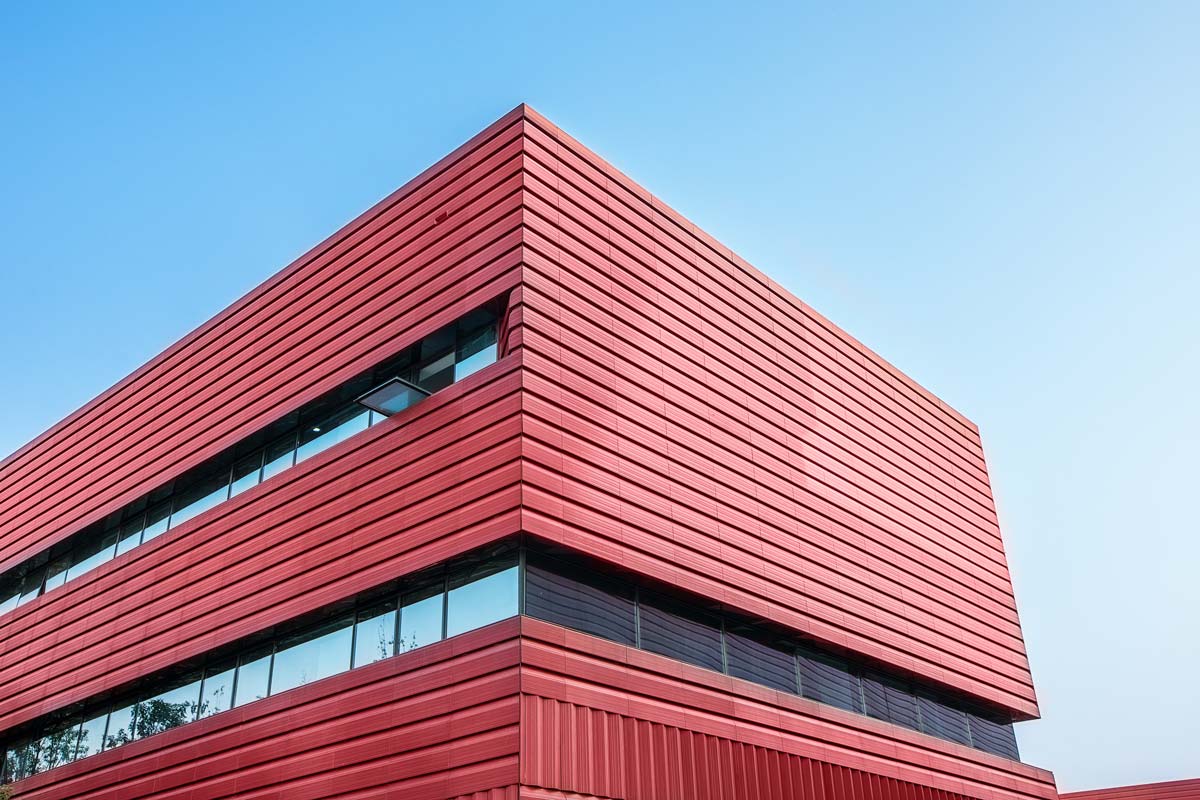 Terracotta rainscreen cladding design for most part of the building facade

As for the main facade of the building, the architects custom-made three glazed Terracotta Cladding products with various shapes. These vermilion-colored products feature irregular surface textures. The trapezoidal terracotta panels are installed horizontally, which constitutes the transverse texture on most part of the building facades; the triangular terracotta panels are installed vertically, which becomes a partial embellishment of the facade and increases the richness of the facade. 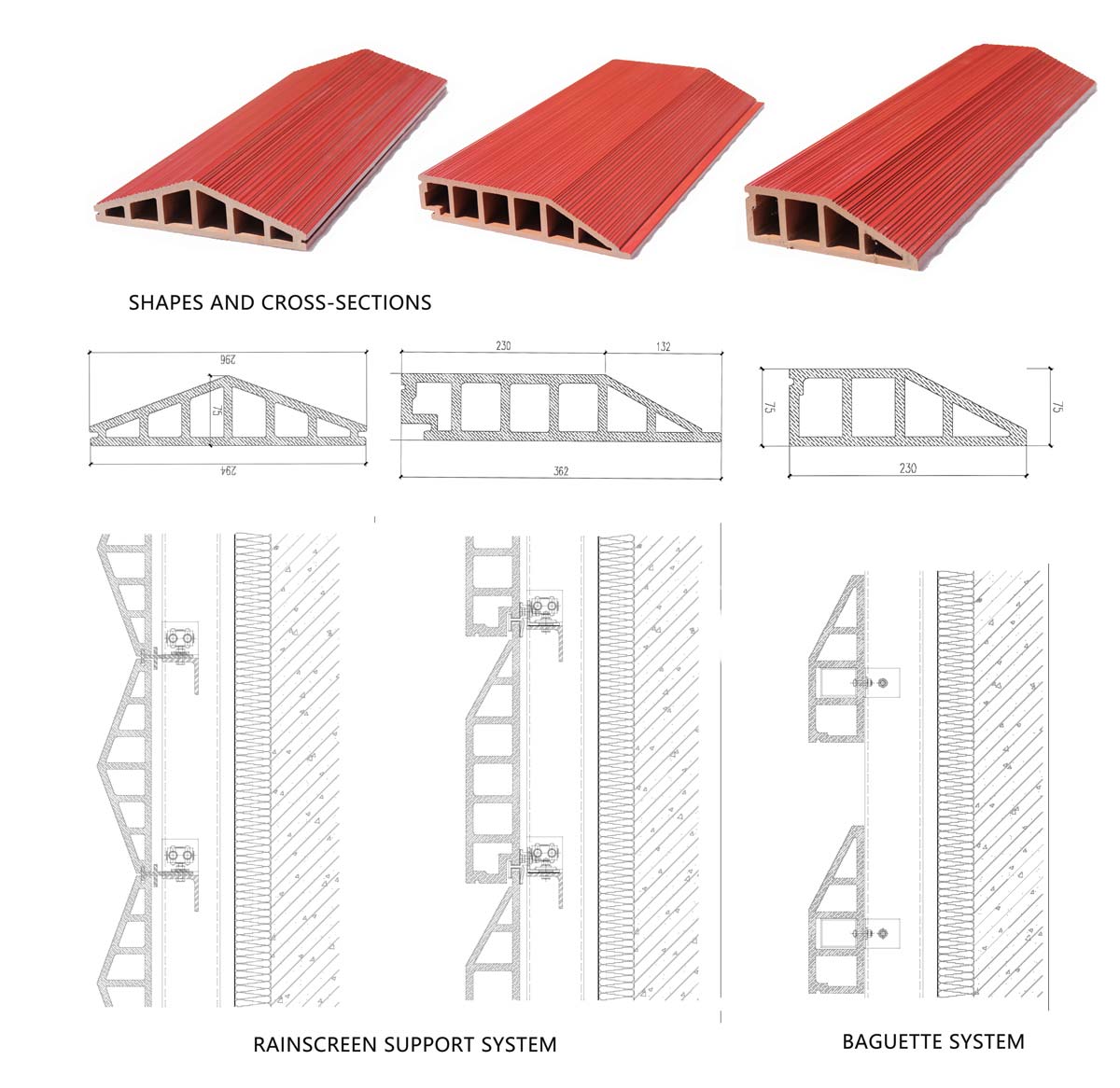 A number of slightly smaller trapezoidal terracotta baguettes are installed laterally in front of the glass curtain wall on the first floor of the building, providing a shade with decoration effect and sunshade function. The baguette system is using back fixing method which require the drilling of backside holes to accommodate the hardware. It's a nonexposed support system that perfectly fit the design for this project. 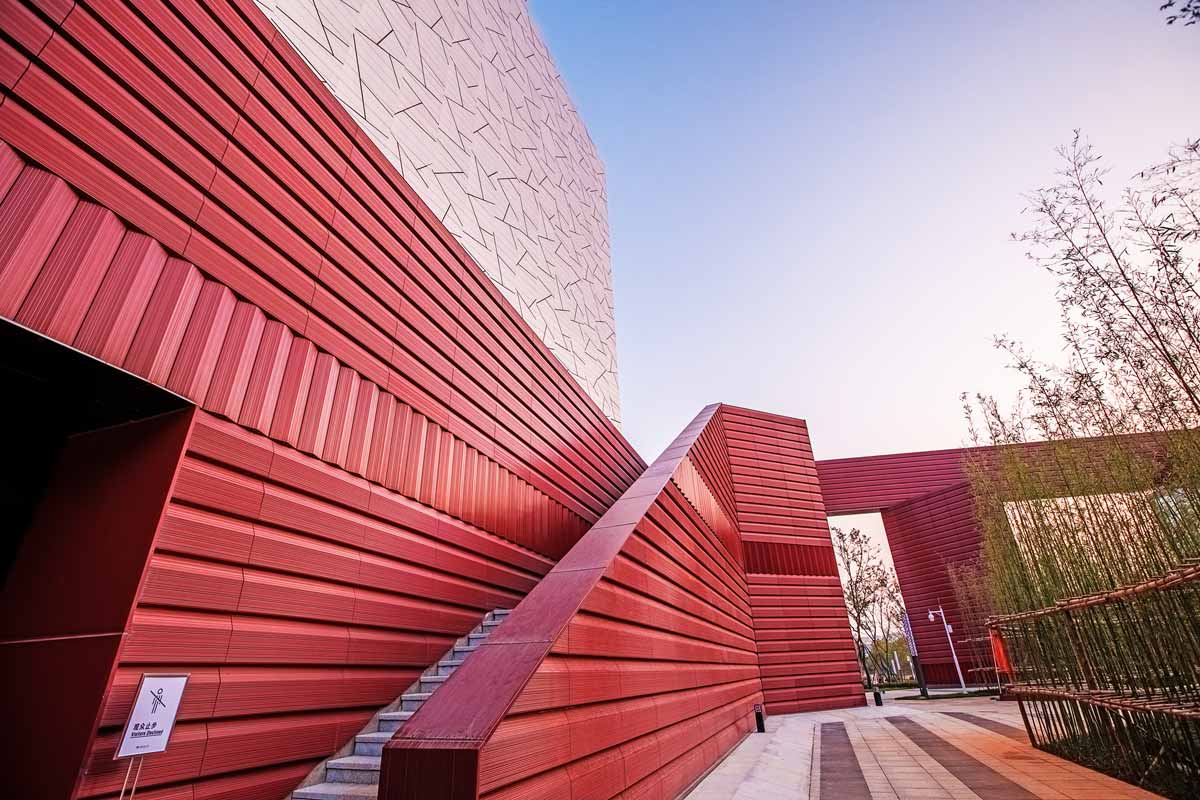 The design of the texture and shape of the terracotta cladding products, together with the light and shadow, produce a fantastic color effect for the building facade through interaction between void and solid. The glazed surface is subject to change under the sunlight, and the vermilion-colored terracotta panels surface demonstrates a very rich color transition and change as the light changes. The rough and powerful transverse texture of the main façade is intertwined with the softness of the white facade, which strikes a perfect balance between the void and solid, masculinity and femininity, yin and yang. 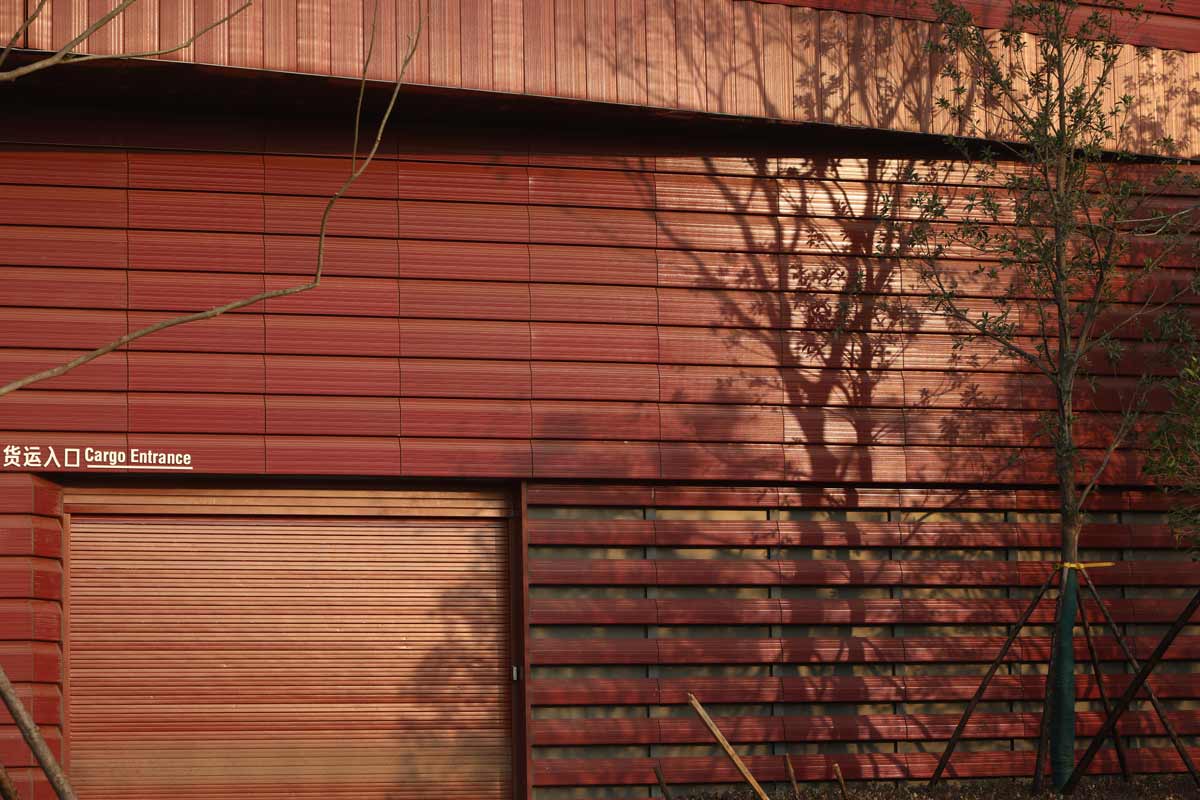